In the past several decades, our environment has become much louder due to mobility and industrialization. This development has become a severe problem for many people. Permanent noise represents two key dangers:. Once a person’s sense of hearing is damaged, it can start to diminish unnoticed over time, which can lead to worsening tinnitus and anblyacousia. Hearing loss may also contribute to mental illnesses that can start with insomnia, inability to concentrate (due to the tinnitus), all of which can further lead to allergies, circulation diseases, high blood pressure, even to an increased risk of heart attack.

Noise is a mixture of different sound waves that arise in solid compounds, liquids or gases (air). Depending on the way they are transmitted, the waves are called airborne or structure-borne noise. 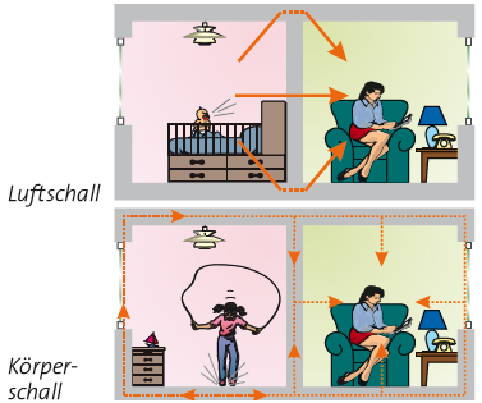 Sound is normally transported by both through the air and through solid objects. The intensity of the variability in pressure is called sound pressure, and can be extremely variable, from the ticking of a clock to the crack of a gunshot, and is measured in decibels (dB). 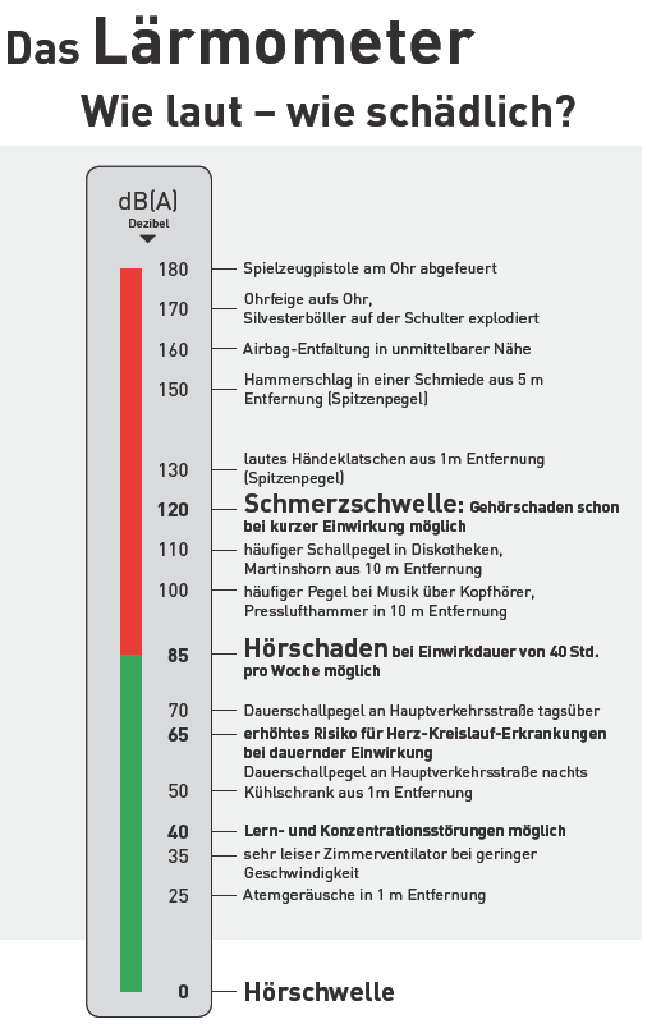 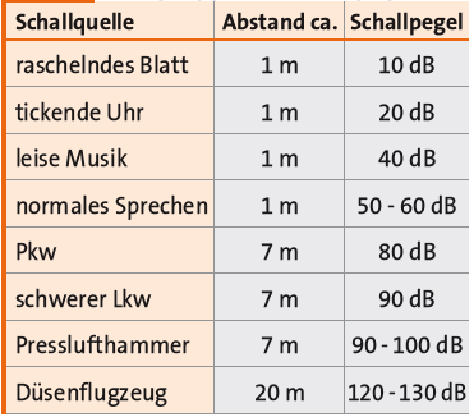 Frequency is the number of waves or vibrations per second, and is measured in Hertz (Hz). Sound or noise is composed of many waves of different frequencies. Deep tones are low frequencies and high tones are high frequencies. 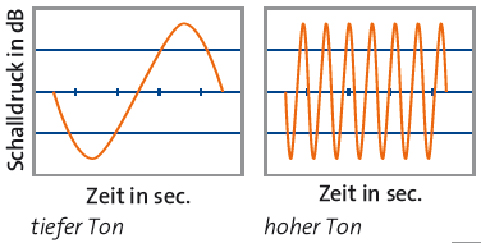 The mix of these frequencies in a sound can be represented as a frequency spectrum. The frequency spectrum of sounds that the human ear can hear falls between 20 and 20,000 Hz. Only the highest frequency range i.e. kHz to 4 is relevant to protecting against structural noise; humans’ ability to perceive frequencies in this range drops off markedly in either direction from this point. Sound insulation ratings, therefore, mainly take the range between 100 and 5000 Hz into account. The rating represents the fact that the human ear perceives high frequencies more readily than low frequencies into account and states it in terms of dB(A). “A” means adjusted. Defining sound reduction does not follow a linear path, but rather is a logarithmic function. Two sources of sound that are each 80 dB, for example, do not add up to 160 dB, but only to 83 dB. Thus, the human ear registers a difference of ± 10 dB as doubling, or cutting, the volume in half.
Generally, the following rating applies based on logarithmic assessments:
10 dB insulation = 50 % noise reduction
20 dB insulation = 75 % noise reduction
30 dB insulation = 87.5 % noise reduction
40 dB insulation = 94.25 % noise reduction
Since a large percentage of today’s installed soundproof glass insulation is rated for 40 dB, this type of glass only lets about 6% of external noise inside.

A building component (e.g. glass) with a noise-reduction capacity rating of 40 dB will reduce the 70 dB of outside noise to 30 dB on the inside of the building, which is a noticeable reduction that is one sixteenth the outdoor noise level. When working with buildings, it is not possible to consider the building itself in terms of noise level. One must take the entire periphery around the building into account to get the total dB possible for sound reduction.

The noise for solid objects is defined acc. to EN 20 140, EN ISO 717 and EN ISO 140, and is stated as Rw in dB. This is done by measuring and comparing a reference curve. Rw represents an average sound insulation over the relevant frequencies. 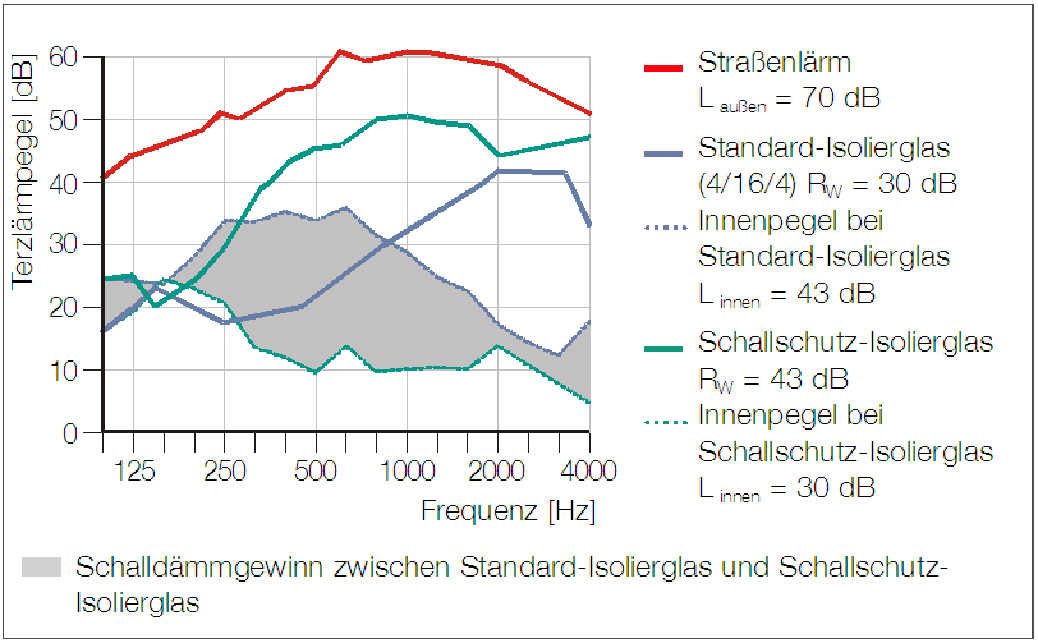 This statement can be used to compare and calculate individual acoustic components to arrive at the total sound level. However, real-life application has shown that, depending on the noise source for these Rw mean values, there are certain correction factors that must be taken into consideration, which are also defined in the EN. 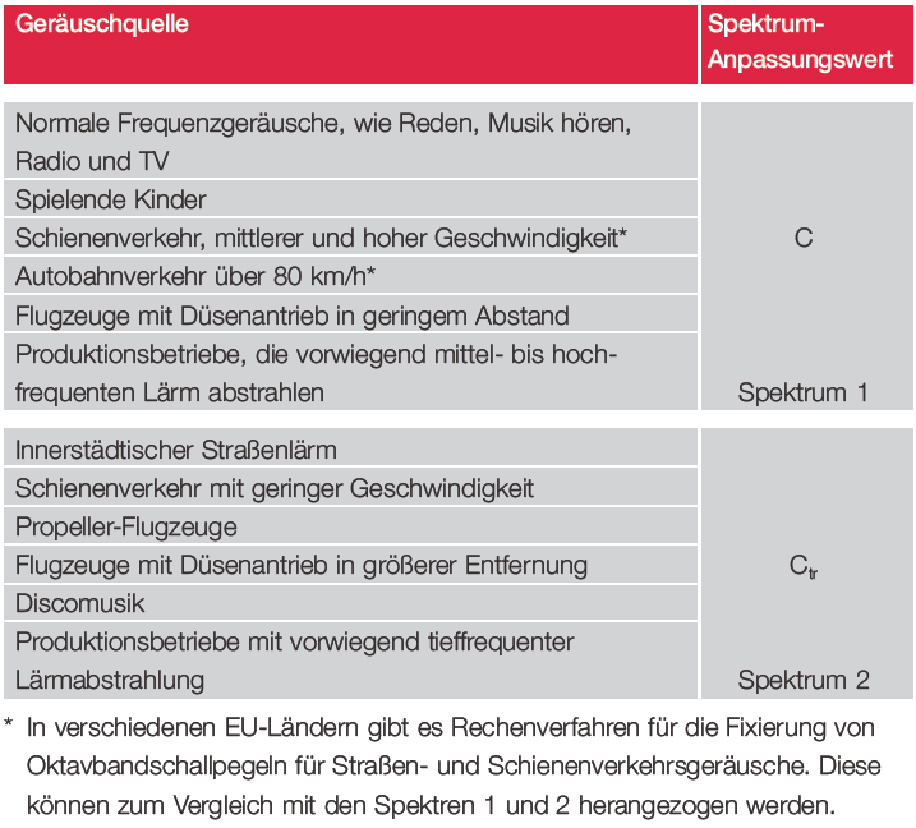 These correction factors, i.e. spectrum adaptation values C and Ctr, reduce the sound reduction index Rw of the component if the noise sources acc. to the EN list are causative. This means that a component with the values Rw (C,Ctr) = 40 (-2,-8) has an average insulating capacity of 40 dB, e. Especially for noise sources at higher pitches. However, the noise reduction is 2 dB lower, and mainly for those with lower frequencies, the reduction is even 8 dB lower.

It generally follows that the thicker the pane per surface unit is, the greater the noise reduction. Therefore, insulation efficiency increases as glass thickness rises. 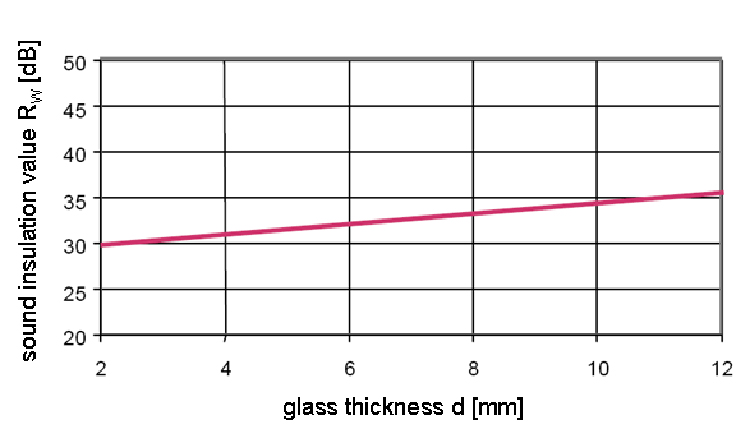 A two- or even three-paned insulating glass is a so called mass-spring-mass system: both outer panes (masses) are separated from each other by the air or gas that fills the interspace. The interspace muffles the vibrations from the outer pane before they reach the inner, second pane, with the rule being the. The bigger the interspace, the more effective the noise reduction. But this is only possible to a limited degree, since this process not only reduces thermal insulation (see > chapter 3.3) but also increases the climate’s impact on the unit. If you moderately increase the interspace with an asymmetrical insulating structure, the glazing will produce excellent noise reducing values. 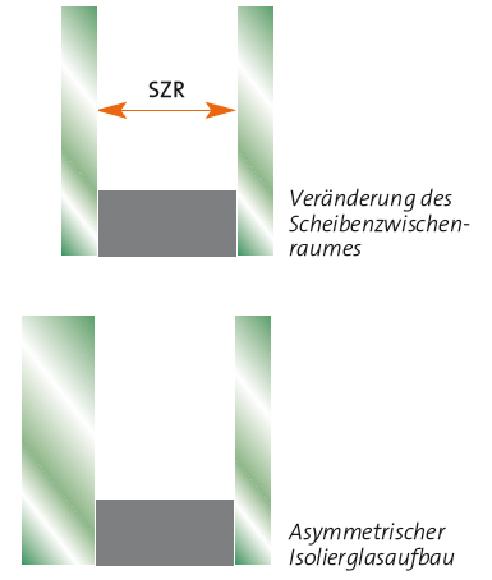 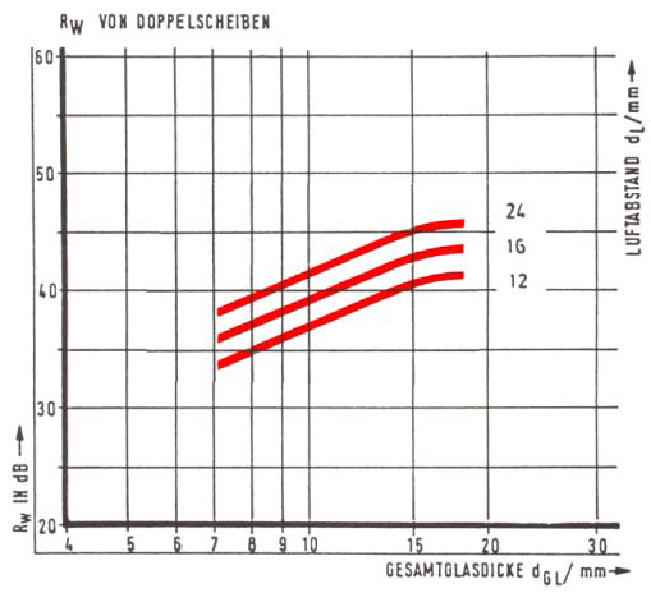 The noise-reducing effect of thicker, heavier glass may be further optimized by using laminated film to connect two single panes of glass. With this solution, the thickness and space weight remain the same; the pane, however gets “softer” and thus increases its insulating capacity in terms of sound waves. 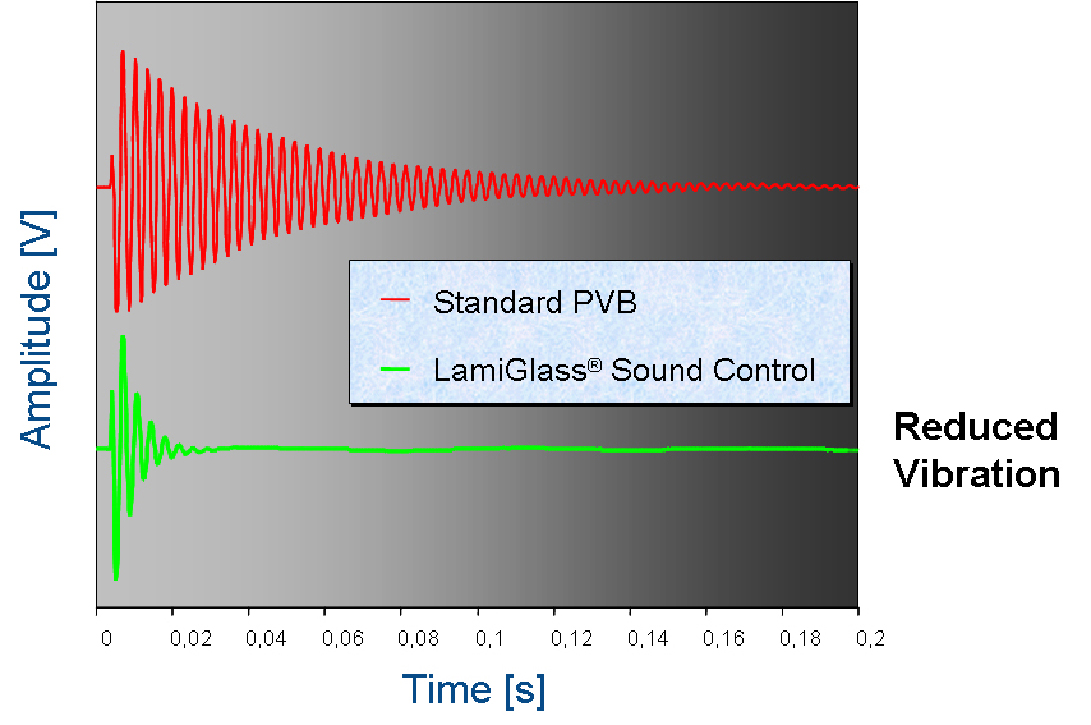 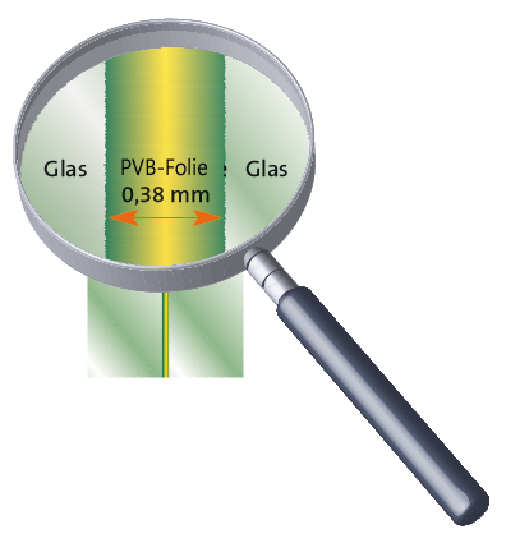 Special noise-protection films are also used nowadays in addition to the usual commercial PVB films that have been used utilized to produce laminated safety glass for many years. In addition to the safety aspect, they increase noise protection. 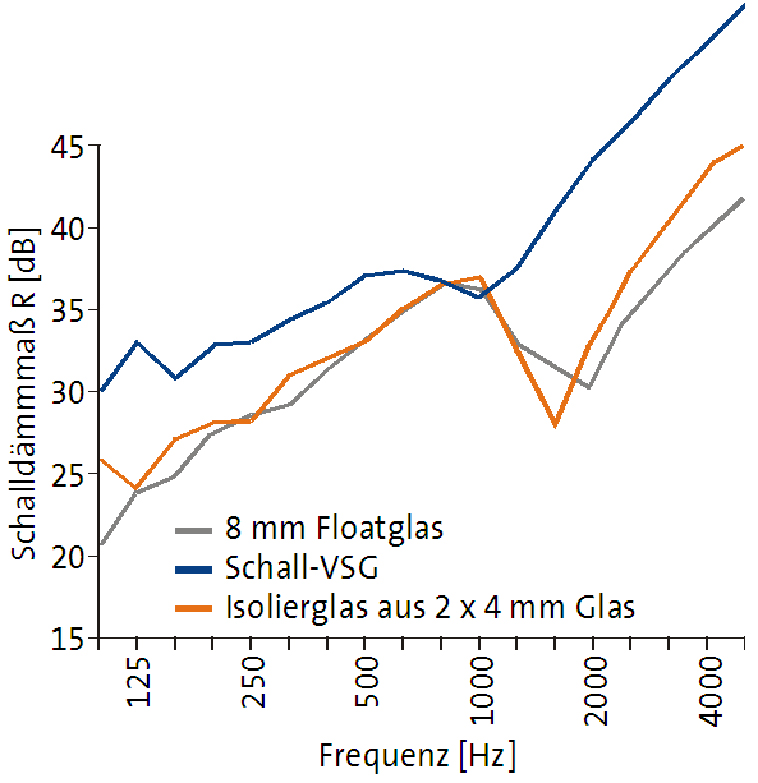 The Guardian base line of products uses two different versions for manufacturing noise control products. The first version is for manufacturing laminated safety glass products that provide improved sound insulation because they are made using the proven polyvinyl butyral (PVB) (see > chapter 7.4). 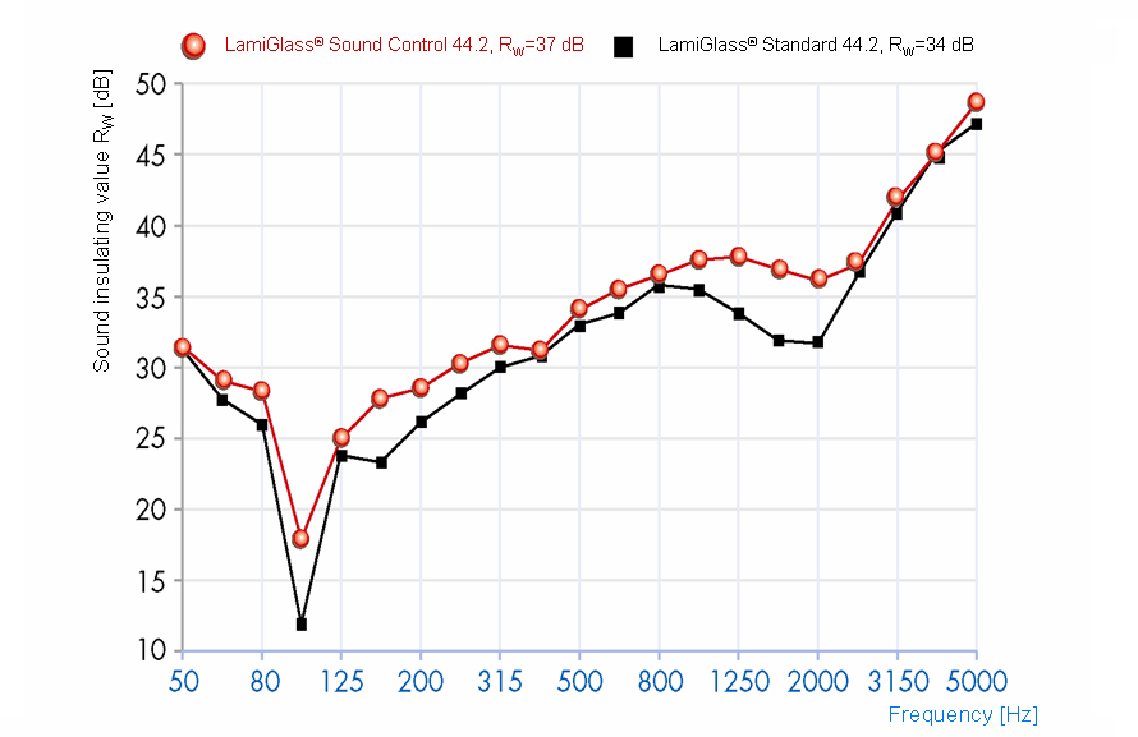 Another improvement to the products is that standard films have been replaced with sound-optimized versions. Depending on the structural requirements of the building, you can choose between different types of glass since a wide range of functional glass is manufactured (see > Chapter 10).